Where Are They Now? Breland Moore 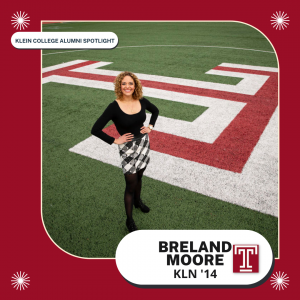 In her time as a Temple undergraduate, FOX 29 Sports Anchor Breland Moore ( KLN ’14 ) often took center court at Temple’s Liacouras Center, but not as a basketball team member. She appeared in costume as Temple’s beloved mascot, Hooter The Owl.

“I never thought dancing in an owl suit would open so many doors, but it really did, and those are the things that will stick with me forever,” she said in a 2022 interview.

Breland’s talent and outgoing personality were a perfect fit to portray Hooter, the most prominent character on campus. As a Freshman, Breland became the first woman to perform the role. She used that opportunity to create and maintain connections in Sports Journalism. In addition to her double life as Hooter, she was a member of Temple’s chapter of the Society of Professional Journalists, worked with Owl Sports Update, served as the athletic department liaison for the Office of Sustainability, and scored an internship with the Philadelphia Flyers.

After graduating from Temple, Breland launched a vibrant career in sports media, including an Emmy nomination in Rochester, NY, and coverage of back-to-back Super Bowls in Kansas City, MO; Breland returned to Philadelphia as a FOX 29’s sports anchor. This historic move also marked the first time a woman of color has ever occupied the sports anchor chair in Philadelphia, America’s 4th largest Television market.

Breland credits much of her success to her involvement in many of the diverse and fulfilling opportunities available to students at Temple.

Click here to learn more about Temple’s Klein College of Media and Communication, where you can also become an owl on the air.