Where Are They Now? Steve Capus KLN ’86 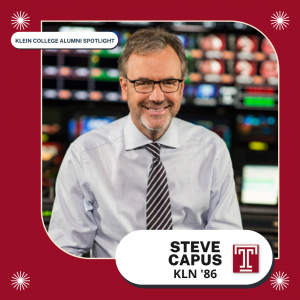 Steve Capus has worked in news media for over thirty years with vast experience with multi-platform media. He has worked extensively as a producer, news gatherer, and former president of NBC News.

After graduating from Temple University in 1986, Steve began his journalism career at Philadelphia’s WCAU and KYW-TV. His diligent work ethic did not go unnoticed, and before long, he became an Executive/Senior Producer and then eventual President of NBC News. During this time, he had oversight of the network’s news broadcasts, newsgathering, talent management, MSNBC, NBCNews.com digital and mobile properties, and syndicated programming.

Steve’s tenure at NBC News was marked by years of robust ratings and equally notable success on a business level. He led his organization into revolutionary media platforms such as mobile and digital developments and websites. He also helped to target specific cultural and racial demographics such as the American Hispanic and African American communities through web-based content directed at engaging these audiences. Under his leadership, NBC News was honored six years in a row with the esteemed Edward R. Murrow award for Overall Excellence in the network news category. In addition, in 2015, Steve was inducted into Temple University’s Gallery of Success.

Later Steve would take the role of Executive Editor & Producer of CBS Evening News. In this role, his multi-platform expertise, decades of news gathering, and production experience provided an essential resource to the entire news division.

Click here to learn more about Temple’s Klein College of Media and Communication, where you can be a multi-media pioneer, too.