Where Are They Now? Marsha Cooke 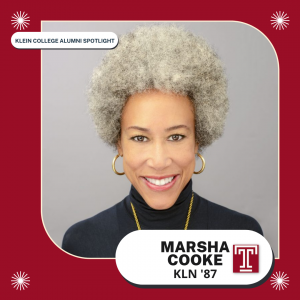 This 1987 Klein College graduate is a multimedia powerhouse, a trailblazer in broadcast news, and one of our most accomplished graduates. Cooke’s latest challenge is serving as vice precedent & executive producer for ESPN Films. She oversees project development, productions, distribution, branding, and strategy under the ESPN Films umbrella, including the vaunted 30 For 30 series.

Before moving to ESPN, Cook was the senior vice president of global news and special projects at VICE Media Group. While at VICE, Cooke developed and produced special project programming, which allowed the company to play a crucial role in integrating VICE’s forward-thinking vision with its award-winning content. Before that, she spent 24 years at CBS NEWS, where she was the first woman of color to serve as Asia Bureau Chief and later launched CBSN, the news division’s national streaming service. Cooke is the recipient of a News & Documentary Emmy and a Gracie Award. A facile storyteller with an excellent eye for new trends and new talent in media, Cooke is an inductee of Temple’s Lew Klein Hall of Fame and the university’s Gallery of Success.

Click here to learn more about Temple’s Klein College of Media and Communication, where you can be a trailblazer, too.