Where Are They Now? Joby Warrick 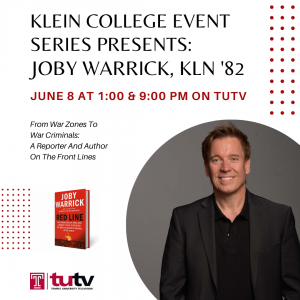 What kind of talent and drive does it take for a local reporter to go from covering hometown news to capturing the stories that change our lives on the global stage? Temple Alumnus Joby Warrick, KLN ’82, knows. He made the journey from general assignment reporter to investigative journalist to two-time Pulitzer Prize-winning nonfiction author.

Joby Warrick joined The Washington Post’s National staff in 1996. He has served with the Post’s investigative and national security teams and currently writes about the Middle East, terrorism, and weapons proliferation. He is the author of three nonfiction books, including his 2021 book “Red Line: The Unraveling of Syria and America’s Race to Destroy the Most Dangerous Arsenal in the World.” His second book, “Black Flags: The Rise of ISIS,” was awarded a 2016 Pulitzer Prize. His first book, “The Triple Agent,” recounts the 2009 suicide attack by an al-Qaeda informant on a CIA base at Khost, Afghanistan, that killed seven U.S. intelligence operatives. Before joining The Post, Warrick covered the fall of communism in Eastern Europe as a UPI correspondent and worked as a reporter at the Delaware County (Pa.) Daily Times, the Philadelphia Inquirer, and The News & Observer of Raleigh, N.C.

Join us as Warrick shares stories from his latest book, Red Line, and takes us inside a harrowing, little-known mission to find and destroy Syria’s chemical weapons while keeping them out of the hands of the Islamic State.

Don’t miss this special event, moderated by Dean David Boardman. Wednesday, June 6 at 1:00 and 9:00 pm on TUTV and Templetv.net. You can also watch this event on Comcast Channel 50,  Verizon Channel 45, and Campus Cable 103.