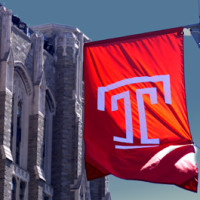 A Conversation with Lew Klein

A Philadelphia broadcast legend, long-time professor, and the namesake of the Klein College of Media and Communications, Lew Klein talks about his 60+ years as an educator, how he got his start in broadcasting, the ways in which television has changed, his role at the University over the years, and the story behind the Lew Klein Excellence in Media Awards, as well as some of his former students, including actor Bob Saget and sports announcer Merrill Reese.

Journalism Then and Now