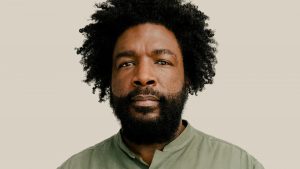 Temple University’s Klein College of Media and Communication will honor Oscar- and Grammy-winning musician Ahmir “Questlove” Thompson with its 2022 Lew Klein Excellence in the Media Award. Tune in LIVE Sunday, October 23, at 5:00 PM on TUTV or Templetv.net

Questlove, a Philadelphia native, will receive the honor on Sunday, October 23, 2022, during the college’s Lew Klein Alumni in the Media Awards banquet. At that event, six prominent Klein College alumni will be inducted into the school’s Alumni Hall of Fame, and one younger alumnus will be honored as a “Rising Star.”

Questlove is renowned for excellence in many forms of media and entertainment. He is best known as the co-founder of Philadelphia’s most influential hip-hop group, The Roots, which is the house band for The Tonight Show Starring Jimmy Fallon. In addition, Questlove is the musical director of the show. He has won six Grammy Awards and directed various musicians, including D’Angelo and Jay-Z.

In 2021, Questlove made his directorial debut with the Academy Award-winning feature documentary Summer of Soul, which explores the legendary 1969 Harlem Cultural Festival. The film premiered on the opening night of the 2021 Sundance Film Festival, where it was awarded the Grand Jury Prize and the Audience Award for Best U.S. Documentary. The movie broke the record for the highest-selling documentary to come out of Sundance when Searchlight/Hulu acquired it, and it has since gone on to win Best Feature Documentary at the 2022 Academy Awards, Best Documentary at the 2022 British Academy Film Awards and Best Music Film at the 2022 Grammy Awards. In addition, former President Barack Obama named Summer of Soul one of his favorite movies of the year.

Additionally, he served as executive music producer and composer on the A&E miniseries Roots and co-produced the Grammy Award-winning Original Broadway Cast Recording of Hamilton. He co-starred in a voiceover role in Disney Pixar’s Oscar-winning animated film, Soul.

“Questlove’s accomplishments across forms of media – from music to books to film – are remarkable, and Summer of Soul is an essential piece of cultural history,” said Klein College Dean David Boardman. “As Philadelphia’s public university, we are thrilled to honor Questlove in his hometown, and he honors us by coming to meet with our students and Klein College community.”

Questlove will receive the honor in Mitten Hall’s Great Court, following a panel discussion and conversation with students in the Temple Performing Arts Center. 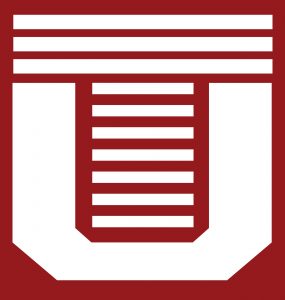 Tune in Thursdays at 10:00 AM for LIVE coverage or watch the replay at 6:00 PM on TUTV and Templetv.net

You can also watch it on Comcast Channel 50, Verizon FIOS Channel 45, and Campus Cable 103. 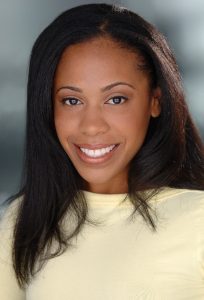 Host Alyssa Threadgill and her new cohost Ahn’yae Hedgepeth sit down and get to know Temple alumna and Producer Lindsey Granger. Hear about her Temple experience, the importance of a positive mindset, and more!

You can watch it on Comcast Channel 50, Verizon FIOS Channel 45, and Campus Cable 103. 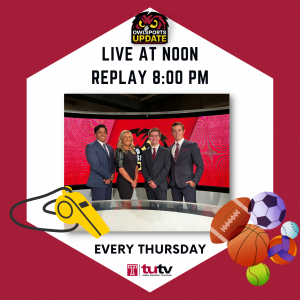 Tune in LIVE every Thursday at Noon, or watch the replay at 8:00 pm on TUTV and templetv.net

You can also watch it on Comcast Channel 50, Verizon FIOS Channel 45, and Campus Cable 103. 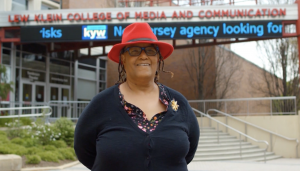 “Find out where you might be of help, and educate others…Shine The Light” ~ Claire Smith

In this pilot episode of Claire Smith: Shine The Light, host Marc Zumoff sits down with the Co-Director of The Claire Smith Center of Sports Media, Claire Smith. Smith has spent four decades covering baseball and has become a pioneer in the sports journalism world. Together, they discuss how she discovered her love for sports journalism, her trailblazing induction into the Baseball Hall of Fame, and how she cultivated a different kind of storytelling in broadcast media that focuses on what The People NEEDED to hear, not just what they wanted to hear. Later, they talk about the Center for Sports Media and why Honesty, Integrity, and Morality are the touchstones of the center.

Tune in to TUTV Monday, September 26th, at 11:30 am & 7:30 pm and learn more about how the first Woman of Color took Sports Journalism by storm and how she is helping the next generation of students Shine The Light. You can also watch it on Comcast Channel 50, Verizon FIOS Channel 45, and Campus Cable 103.

*The Claire Smith Center For Sports Media is a world-class academic center focused on teaching, training, and researching the areas of sports journalism, advertising, public relations, and production. * 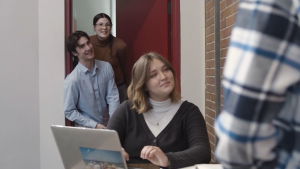 This Episode Includes The Following Skits

Tune in Saturday, September 10th at 5:00 pm on TUTV and Templetv.net 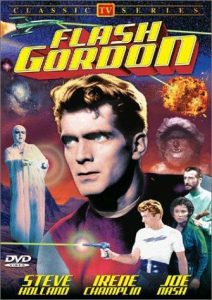 Labor Day weekend is here! You’ve earned a break! So kick back and relax this holiday weekend with TUTV.

TUTV will be airing a marathon of Flash Gordon on Monday, September 5th from 10:00 AM to 2:00 PM on TUTV and Templetv.net. You can watch it on Comcast Channel 50, Verizon FIOS Channel 45, and Campus Cable 103.

This 1954 program follows the adventures of Flash Gordon, a handsome polo player, Yale University graduate, and his companions Dale Arden and Dr. Hans Zarkov. The story begins in the year 3203. As agents of the Galactic Bureau of Investigation, the team travels the galaxy in their ship, the Sky Flash, battling cosmic villains under the order of Commander Paul Richards.

Inside The Nest Returns 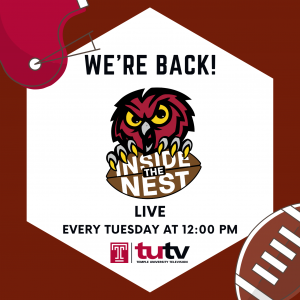 Temple Football is back, and that means so is Inside The Nest!

OwlSports Update presents Inside The Nest. A weekly recap of the latest Temple Football game before switching over to Head Coach Stan Drayton’s weekly conference, followed by a comprehensive breakdown of news and comments revealed at the conference.

Tune in to TUTV LIVE every Tuesday at 12:00 PM for the latest coverage of Temple University Football. You can also watch it on Comcast Channel 50, Verizon FIOS Channel 45, and Campus Cable 103. 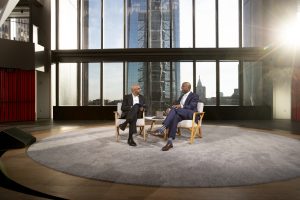 The Board of Trustees formally welcomes Dr. Jason Wingard as the 12th president of Temple University. The ceremony will reflect President Wingard’s strategic priorities and the university’s role as a leader in higher education, emphasizing the themes of opportunity, the future of learning and work, discovery, and community.

Join us in welcoming President Wingard LIVE at The Liacouras Center Friday, September 16, at 11:00 am on TUTV and Templetv.net. You can also watch it on Comcast Channel 50, Verizon FIOS Channel 45, and Campus Cable 103.

Want To Get Involved With TUTV? 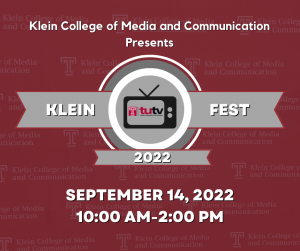 Klein Fest is back!  Come check out TUTV in the Annenberg Hall Atrium Wednesday, September 14th, between 10:00 am and 2:00 pm. Once you are here,  you can bounce around, ask questions, and peruse the full scope of what Klein College has to offer. All students are welcome; no prior TV experience necessary.

You’ll be able to meet with students representing organizations and media outlets with focuses on the following areas: 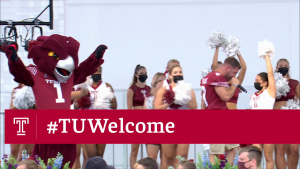 Convocation at Temple University is a tradition that occurs annually during Welcome Week. This formal ceremony, which follows school and college meetings, celebrates the arrival of the new class of undergraduate students, freshmen, and transfers. Various university leaders will welcome the new class and mark the beginning of students’ academic journey. 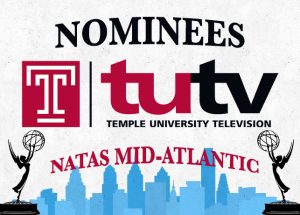 The Mid-Atlantic Chapter of the National Academy of Television Arts and Sciences (NATAS) released the nominations for the 2022 Mid-Atlantic Student Awards, and Temple students received a total of 11 nominations in 5 categories. TUTV original shows Temple Update, OwlSports Update, Inside The NEst, The Temp, Temple Smash, and Feel Good Cooking were included in the list of nominations. You can see a full list of the nominees here and watch the nominated TUTV programs below:

“Businesses Still Struggling to Recover One Month After Hurricane Ida” 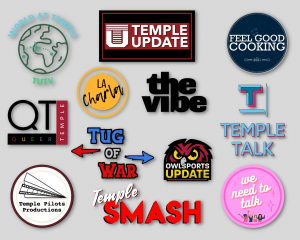 TempleFest is back, and we want to see you! So stop by our tables on Liacouras Walk and hear from the students behind some of our most notable TV shows Thursday, August 25, from 1-5 pm.

Come by and find out how you can get involved with TUTV. Remember, you do NOT need to be a Klein Student, Journalism, or MSP major to help. TUTV welcomes all students within Temple University. The following programs will be participating in TempleFest 2022:

Don’t miss this opportunity to get involved with TUTV and launch your media career!

Power Hour with the Pros 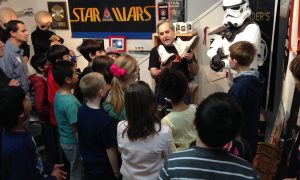 Steve Sansweet, KLN ’66, is the chief executive officer of Rancho Obi-Wan Inc., a not-for-profit museum in northern California’s Petaluma that houses what the Guinness World Records calls the world’s most extensive private collection of Star Wars memorabilia in the world. In 2011, Sansweet was awarded the prestigious Inkpot Award for Service to Fandom by San Diego Comic-Con International. Sansweet left his newspaper career as a former reporter for The Philadelphia Inquirer and then the Wall Street Journal in 1966 to work for 15 years at his dream job: head of fan relations and director of content management at Lucasfilm Ltd., where he continues as a consultant.

Join us for a conversation with distinguished Klein College of Media and Communication alumnus Steve Sansweet, KLN ’66, journalism graduate and former editor of the Temple News, discussing a career that has taken him from newspapers to a life promoting the Star Wars franchise.

We Need To Talk Is Recruiting 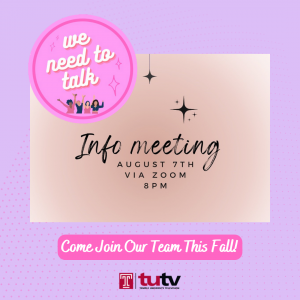 We Need To Talk is TUTV’s first all-female talk show. A group of diverse female hosts brings their unique perspectives to topics such as current events, the latest trends in beauty and fashion, and their own lives.

We Need To Talk TUTV is seeking to recruit new faces! If you are interested in working on a TV show, this info session is for you. Join the team Sunday, August 7th at 8 pm for an informal meeting via Zoom. They are looking for students interested in working in production, communications, and on-camera.  To sign up for the session, fill out this Google form so they can have some information about your interest before the meeting.

Click HERE for more information about We Need To Talk.

Register for the meeting HERE.