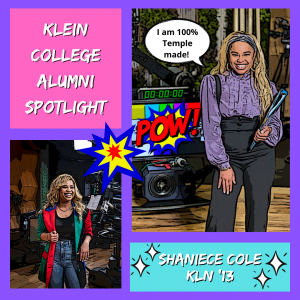 “I am 100% Temple-made! Everything I learned, how they strengthened my skills, and all the opportunities there showed me not to limit myself or put myself in a box.”

Producer and actor Shaniece Cole radiates positivity and confidence in her life and her blossoming career.

With a combination of talent, faith, and the support of her identical twin sister, Shanae, the vibrant Shaniece Cole (KLN ’13) evidences a passion for the entertainment industry that inspires her audiences, colleagues, and the people who come into contact with her.

As an undergraduate, Shanice participated in Temple University’s Los Angeles Study Away program and discovered that her dream of a Hollywood career could be realized.

While there, Shaniece interned at BET Networks. Determined to cultivate her big break, Shaniece networked within that respected cable channel and other production companies in the LA creative community, hoping to return there after graduating from Temple in spring 2013.

With her newly minted degree in hand, Shaniece landed back at LAX and soon landed two part-time TV jobs. One post in the development department at ABC and one in the public relations unit at VH1.

Impressed by her work and tenacity, Shaniece was hired full-time at ABC.

Her inquisitive nature and outgoing personality did not go unnoticed, resulting in new opportunities at The E! Network, Steve Harvey, and, now, working for Access Hollywood.

Early in her time at Access Hollywood, Shaniece asked if she could combine her position and her love for Comics to cover The San Diego Comic-Con. She scored an interview with the cast of Black Widow that ended up as the lead story. “You never know unless you ask,” Cole said.

Since then, Cole has become the go-to producer, covering the Superhero beat for Access Hollywood. She has interviewed actors Jeremy Renner, Sebastian Stan, Margot Robbie, Gal Gadot, and more. She brings her enthusiasm to these interviews and will dress up like the person she’s interviewing. Her commitment and genuine love of pop culture set her apart and ahead of many others who report on the entertainment industry.

Shaniece is also focusing on an acting career. She booked her first role on Netflix’s “Family Reunion” and has also made an appearance on the CBS-TV hit series “The Neighborhood.”
“I am grateful that I’m still able to do the talent stuff as well,” Shaniece Cole said. “I feel like if you’re meant to be doing something, everything else will work itself out.”

Click here to learn more about Temple’s Klein College of Media and Communication, where you can also become Red Carpet Ready.