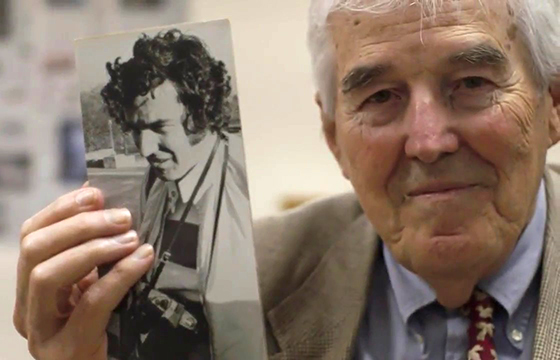 In a new episode of Temple Flashback, TUTV General Manager Paul Gluck sits down with Dr. Ed Trayes, Klein College of Media & Communication’s iconic Photojournalism professor, who has worked at Temple for five decades and plans to retire at the end of the year.

Dr. Trayes was recruited as one of the original faculty of the School of Communications and Theater, as it was called then, in 1967and has since helped many generations of Temple Owls find their unique vision of life through the lenses of a camera. Trayes describes his career in both teaching and journalism, how he helped build the photography program at Klein, and his teaching philosophy.

It has recently been announced that the University will replace Annenberg Hall, and so you don’t want to miss Ed recall first entering the then-newly built Annenberg Hall, which was state-of-the-art for its time. He has kept the same office since then.

Tune in to TUTV Thursday, September 19 at 1 and 9 p.m. to see this in depth interview with one of Temple’s most beloved professors.