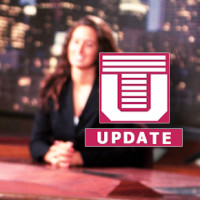 A weekly, half-hour news program produced, written, directed and anchored by Temple students. Update focuses on news and events on campus, in the surrounding area and anywhere there may be a story of interest to the greater Temple community. Temple Update is produced every Thursday morning in the TV News Broadcast Production Practicum class, assisted by a dedicated staff of student volunteers.

The 2019 Philadelphia Mayoral Election is here and Temple Update is live in Studio 3 and around the city. Lianna Golden reports from Jim Kenney’s headquarters in Old City, and Victoria Lucas is live in South Philadelphia, home to candidate Billy Ciancaglini. Conall Smith and Carl Tienabeso are at the studio to report on the race for City Council, and Madison Seitchik is in Center City to see how voters feel about the new voting machines. At the end of the night, Jim Kenney is announced Mayor of Philadelphia, after which he delivers a speech to the residents of Philadelphia.