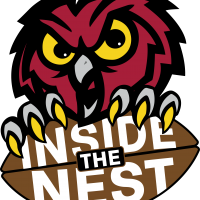 OwlSports Update Productions airs its weekly football show each Tuesday at 12pm during the fall, called Inside the Nest. The crew recaps last week's game and previews the following week's game with player and coach interviews, along with game breakdowns and highlights.

Temple’s new Athletic Director, Arthur Johnson, joins Inside the Nest to discuss his position and his experience at Temple thus far. Hosts Ray Dunne and Jackson Neill recap Temple’s blowout loss against East Carolina (45-3) and allow Head Coach Rod Carey to address the media regarding the team’s loss. Next, Emilie Cochrane reports live from Lincoln Financial Field to touch on Temple’s upcoming game against the Houston Cougars and the controversy surrounding a new football stadium on campus. Hear the hosts’ perspectives on what Temple’s key to success will be as they take on Houston and what stand-out players to look out for. Finally, Luke Meli joins the hosts for their classic game of “No Huddle,” where they debate controversial questions like the most significant weaknesses of the football team and game predictions for their upcoming matches.