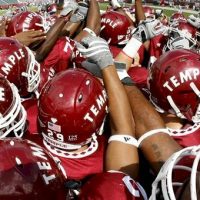 The Owls have successfully avoided elimination from the AAC Championship with a victory against the Tulane Greenwaves. Brooklyn Vaughan and Dan Wilson review Temple’s last game number-by-number, and Ray Dunne takes a closer look at Jadan Blue’s stellar performance this season. Coach Carey is live at Edberg-Olson Hall for his weekly press conference, and Dan Wilson and Dom Gillaspy are live in the studio for a session of “Speech Dissection” as they break down what Rod Carey is really saying. Later, the anchors preview the Owls’ next opponent: the undefeated, nationally-ranked Cincinnati Bearcats. Inside the Nest reporters catch up with the Owls’ players after their practice to learn how they are preparing for the most challenging game of the season. With two weeks left in their regular season, are the Owls still in line for the AAC East Championship title? Brooklyn Vaughan and Dan Wilson go No Huddle to address this question and more on this edition of Inside the Nest.