Sherlock Holmes The Woman in Green 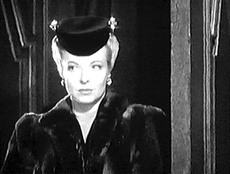 Sherlock Holmes (Basil Rathbone) is up against his arch-enemy, Moriarity (Henry Daniell), who is behind a series of murders with each victim having a forefinger severed. Holmes also finds himself up against Moriarity’s beautiful, but deadly, seductress in green, Lydia. Reasoning that hypnotism is behind Moriarity’s deadly scheme, Holmes visits the Mesmer Club where he finds Lydia, who invites him to her apartment for a “session” to help him solve a “most difficult” case. Using a drug, she hypnotizes Holmes so Moriarity can take control of his mind and lead him to his death. In this battle of wits, Holmes wins, of course, having taken another drug to counter the effects of hypnosis. By playing along with Moriarity’s death walk on the wall, Holmes gives Watson enough time to arrive with the police and put the finger on Moriarity for the vile “finger murders.” (1945)