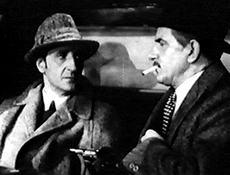 In Basil Rathbone’s last film as Sherlock Holmes, he must beat a gang of counterfeiters to a secret code contained in three music boxes. Holmes believes the beautiful Hilda Courtney (Patricia Morrison) is behind the gang who is trying to take possession of the music boxes made by the prisoner who originally stole and hid a set of Bank of England plates used for engraving five pound notes. Dr. Watson’s friend, Julian “Stinky” Emery, a collector of music boxes who has just acquired one of them at an auction, is visited by Hilda Courtney and falls for her fashionable demeanor. The next moment, after taking a liberty, he is killed by her jealous “chauffeur” and the music box is in the gang’s possession. Holmes deduces that the gang is trying to get all three boxes to complete the code which will reveal the location of the plates. They arrive at the home of the owner of the second music box and are greeted by a chairwoman who is in a rush to leave. After discovering a young girl locked in a closet, they realize what fools they have been when the girl tells them that the hastily departing woman just took her music box. Holmes works to decipher the code, which the babbling Watson actually solves with his reference to piano lessons with numbered keys. Averting death after being captured by Hilda’s men, Watson once again comes through with an off-hand comment about Dr. Samual Johnson, the very doctor in whose home the plates are hidden. As the gang uncovers the plates hidden among the doctor’s books, Holmes arrives to arrest them. (1946)