Sherlock Holmes and the Secret Weapon 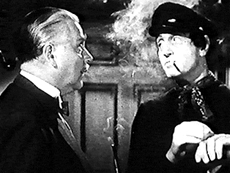 In this film, Holmes is up against his toughest foe, Professor Moriarity (Lionel Atwill). Holmes is working for England in the war against Hitler and has successfully accomplished his mission of getting Dr. Franz Tobel, creator of the extremely accurate and destructive “Tobel Bomb Site,” which the Germans are after, into England. Tobel has ingeniously given four scientists, unknown to each other, key elements of the plan, which will only work if they are brought together. Moriartiy, working for the Germans, has captured three of the scientists, and is in a race with Holmes to decipher a code of dancing men symbols which will reveal the identity of the fourth. In a most Holmesian maneuver, Holmes, after being captured by Moriarity and needing more time for Scotland Yard to arrive, challanges Moriarity to come up with a more imaginative way to kill him, such as draining his blood “drop by drop”. Moriarity promptly falls for the bait, thus sealing his fate when the police arrive (1942).