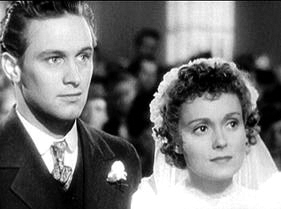 Based on Thornton Wilder’s Pulitzer Prize-winning play about rural home town America (Grover’s Corner, New Hampshire) at the beginning of the 20th century, this is a simple, yet powerful, film adaptation. It features a wonderful score by Aaron Copland and the indelible mark of world renowned production designer, William Cameron Menzies (Things to Come, Invaders from Mars). Wilder’s play and this film focus on two American families, Dr. and Mrs. Gibbs, whose son, George (William Holden), falls in love and marries Emily Webb (Martha Scott), daughter of Editor Frank Webb and Mrs. Webb. The theme of Wilder’s play and this adaptation, that although rural American life seems so simple and uneventful, when we are provided the opportunity to revisit the lives lived we realize how fleeting yet eternal the effects that we have on each another are; a theme echoed six years later in Frank Capra’s equally remarkable It’s A Wonderful Life. (1940)